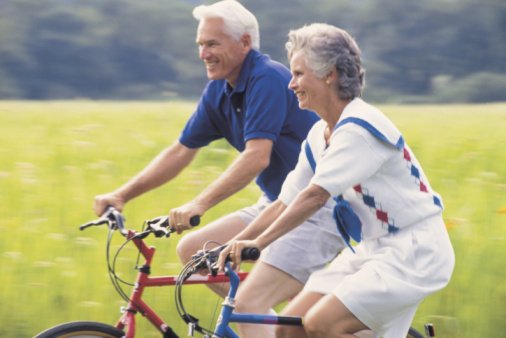 At BestAnti-Aging.com we are claiming for years that Exercise Is The Best Anti-Aging Therapy. And now – finally – a brand new study published by aging cell finally proved it!

The study was done in England. It looked at 125 amateur cyclists aged between 55 to 79 years old. 41  female and 84 men. These were serious cyclists who participate in non-competitive long distance events, and who could ride at least 100 km in under 6.5 hours, for the men, and 60 km in under 5.5 hours for women. This is well above the daily exercise recommended for the average person, but the scientists wanted to see how far the effects of high levels of exercise can reach into old age.

In laboratory tests, the active seniors were found to have retained muscle mass, and had lower cholesterol levels, which is to be expected. Surprisingly, some parts of their immune systems were as robust as those of the younger people. In normal aging, the body’s production of T-cells, which are the immune system’s soldiers who patrol through the blood and fight off invaders, can slow down. That didn’t happen in these active seniors. Of course a healthy immune system provides better protection against disease. The men in the group also showed a robust levels of testosterone, which also tends to decline with age.

This experiment was unusual, in that it looked at the positive effects of exercise on healthy individuals, rather than more common studies that look at the ill effects of sedentary life. And it underlined the benefits to older folks in fighting off some of the particular declines of old age.