It looks like Brandon Truaxe has found a new job with MUDMASKY as the new creative director, exactly 2 weeks after he got removed as the CEO of Deciem by Estée Lauder.

BUT, it looks like there is finally some good news for Truaxe, after weeks of being negative headlines about the previous Deciem CEO. The title as a creative director of MUDMASKY would be very odd, since Truaxe still is the majority stake-holder of Deciem.

Meanwhile Deciem has re-opened all her stores and is continuing with Nicola Kilner as the new CEO.

Truaxe immediately shared the offer on his personal Instagram account @btruaxe , but removed it a few hours later. Truaxe even shared all the details, from salary ($ 250,000 USD per year) to benefits. 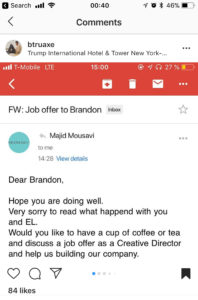 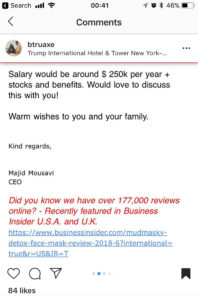 If and when he has accepted the offer, made by the CEO of the company is not clear. However, since he has removed the post, there is a big chance he will.