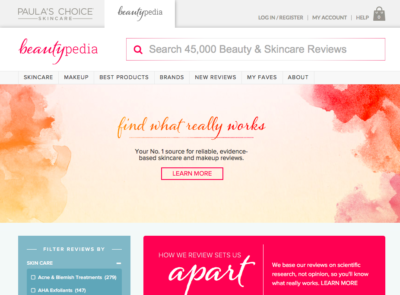 “Beautypedia” of Paula’s Choice, a safe place were you can check reviews of numerous skincare brands, to bad the reviews of Paula Begoun are FAKE! In this exclusive article we will EXPOSE Paula Begoun.

Yes, Paula’s Choice reviews are fake, that’s not an opinion that’s a fact. An Australian skincare company has approached me to have a closer look at Paula’s Choice. So we have done a big investigation regarding this company, who claims to have done thousands of reviews on skincare products.

Who is Paula Begoun?
Paula Begoun, also known as “The Cosmetics Cop”, is an American businesswoman, author and Radio-host. She has done numerous of TV-appearances on extremely populair shows such as Oprah. Paula Begoun is also the founder of Paula’s Choice and Beginning Press Publishing. She is known for her view that skin care and cosmetics should be based on ingredients that have been subjected to peer reviewed research.

Let’s first start with the story of this Australian skincare Company. This is part of the email he wrote to me (for privacy reasons his name has been removed):

“Hi my name is xxxx xxxx and I am the owner of xxxxxx cosmetics. Our brand is growing rapidly and this website called Paula’s choice has completely ruined me with a fake review on her website. How do I know it’s fake? Easy, we only sell online in Australia and we have never sold a single unit in the US. Since the so called “testing panel” of Paula’s Choice is in the US, it’s impossible that they have purchased it from me (and tested it). Furthermore, the picture on her website of my product is the one picture especially made for our website and is clearly copied. I strongly believe that they want to ruin my bestseller, since it’s becoming way populair then their bestseller in Australia.”

Time for BestAnti-Aging.com to investigate Paulas Choice.
First let’s take a closer look at the products her “team experts”, which by the way aren’t really experts (more later), rate “poor”.

It’s a very big coincidence that the “poor rated” products are super populair, is she afraid of competition? The answer is YES, she wants you to only buy her products. When a product is being bashed by her team it’s mainly because the ingredients are bad an dangerous, at least that’s what she wants you to believe. But most of the time the ingredients aren’t that bad as she claims.

Who are the “Team Experts”
The best way to find out is to have a look on LinkedIn and to approach ex-employees who have worked for Paulas Choice. We contacted 3 ex-employees and they all stated the same; Paula’s Choice reviews are fake. The reviews completely made-up. I also asked them why, one girl stated: “Isn’t that fucking obvious??! She want to sell her own crap, with huge profit. As an employee you could get any Paulas Choice product for free. OMG, I have never had so many bad reactions on my skin of her crappy products. We would also get so many products back, it was unbelievable. I just could’t work their anymore, I had to leave that place.”

Why does an expert that has written many books about skincare sells crap?
There are 3 reasons for her to do so; 1) money, 2) money, 3) money. Her products aren’t expensive, but her overhead costs are big. So cheap ingredients is the way to go.

Conclusion
Always do your own investigation buying any (skincare) product. Shame on you Paula, for misleading customers with fake reviews!