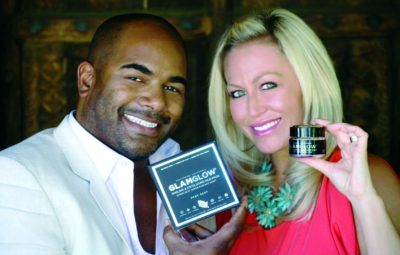 The TRUE story of GlamGlow is one for the books; The Real American Dream has become reality for Glenn and Shannon Dellimore.

Glenn and Shannon Dellimore were hit hard by the financial crisis back in 2008. In an interview with LA-times Shannon told te reporter: “The economy had just crashed, our house was upside down and we were having a baby” Not an ideal situation to start a brand you would say…

Living in LA, she had some close friends which are famous celebs. An we all know it’s way easier to build a brand with the help of celebs. They just needed a brand and a good product.

After doing her research with her husband Glenn, they soon realized that there was a demand for a skincare product that could “boost your skin in minutes” , famous Hollywood Stars could look “camera ready in just minutes”.
They started with only $ 80,- and provide free little samples for friends. Their story is that they have came up with the ingredients, but if you are working in the skincare industry so many years, you know that it’s a mix of two already existing  facemasks. The truth is that the marketing of GlamGlow was completely new.

GlamGlow was introduced to the public in 2011 and it took off super fast. What Glenn and Shannon did was supersmart, they first did the marketing with their celeb friends (read: creating a demand) and then introduced it.
Glenn and Shannon are definitely great marketeers. To build a brand that fast from scratch in a super-completive market deserves a lot of respect. Distribution has now increased to 86 countries with over 6,500 Luxury Retail Stores, Spa Back-Bars, Luxury Hotels, Airlines, and Cruise Lines!

Cosmetics giant Estée Lauder has acquired GlamGlow for an estimated initial price of  $100 million to $125 million and a final possible payout of $200 million to $220 million.

Glenn and Shannon Dellimore showed the world with GlamGlow that the American Dream is still alive.