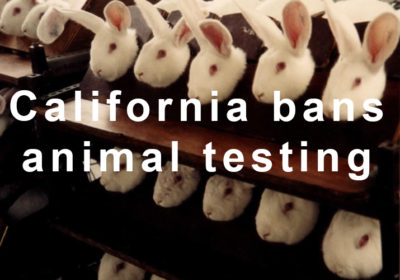 After passing a bill called the “California Cruelty-Free Cosmetics Act” it will be illegal to “sell any cosmetic in California if the final product or any component of the product was knowingly tested on animals after January 1, 2020.” The bill has to be finalized and signed into law by Governor Jerry Brown, but this will only be a formalization.

The European Union have taken measures against animal testing in some capacity. And many U.S. and European based brands voluntarily avoid the practice entirely.

While California is the first state in the U.S. to officially go cruelty-free, China is the the only country that actually requires animal testing before selling into their market.

This is the main reason why some very populair brands of  like GLAMGLOW, Garnier, M.A.C., Origins  still test on animals. Interesting is that most of these brands belong to the biggest cosmetic manufacturers on earth like Estée Lauder, L’Oreal and Coty.