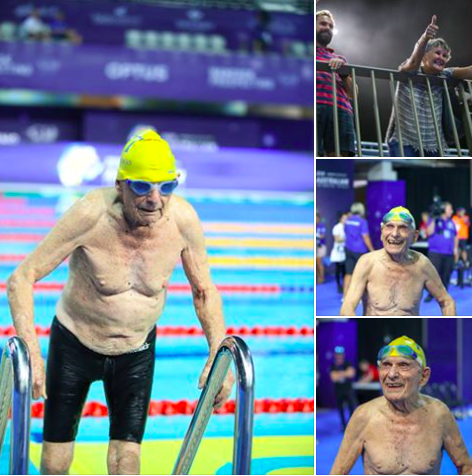 George Corones, a 99-year-old swimmer, breaks the 50m freestyle world record. He completed the 50-metre freestyle swim in 56.12 seconds last Wednesday at The Commonwealth Games in down under.

George is turning 100 years old next month!  The Commonwealth Games are held once every four years and are a kind of olympic games for countries covered by the so-called British Commonwealth such as Australia, Australia, Canada, England, New Zealand, Scotland and Wales. Mr. Corones participated on behalf of  Australia where he has been a member of the Australian Dolphins swimming club in Queensland for years.

After his victory 99-year-old swimmer received congratulations around the world. Hollywood celebs tweeting that he is an example and phone-calls from media around the world. But George seems to most happy at his end time. ,, A day earlier I swam the distance a second slower, ” said the sassy champion to SBS News on Friday. The end time he made is also HIS personal record.

George does’t drink alcohol. So no champagne corks sounded after his world record. ,, I prefer to celebrate this with a sports bottle of water, ” said Corones, who retired 20 years ago. The man swims all his life and hopes with his victory to inspire all elderly people to continue to do sports. “That’s good for your physical and mental well-being,” he assures. He does, however, have ‘good luck’. ,, Actually, apart from a few pains, I’m never really ill. That’s just having fun. ”

George continues to train hard, because he also participates in the 100 meter freestyle during the games. George wants to pulverize the standing record (3.24 minutes) at that distance tomorrow. ,, That will certainly succeed, because I have already completed that distance in 2.24 minutes. ”

We wish you the best of luck George!