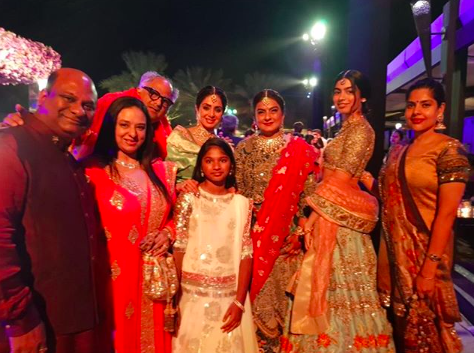 Thousands of fans lined the streets of Mumbai on Wednesday in paying tributes to legendary Bollywood actress Sridevi who died at the weekend in Dubai. The final picture she posted on her Instagram page was this picture above. It was the wedding she attended.

Sridevi, 54, acted in over 300 films in a career that began at age four (!!) and is considered the youngest starting Bollywood actress who made it as a successful actress.

Fans were waiting today  near the house of the actress to lay down flowers. One of them was already there at seven o’clock in the morning. “It does not matter how long I have to wait, but I will wait until I can pay my respect,” he said with tears in his eyes against the The Associated Press news agency. The horde of fans had to be controlled by the police at some point. Colleagues from Sridevi, like the popular actress Aishwarya Rai Bachchan in the west, arrived a bit later and disappeared through a separate entrance in the house.

Reuters reported earlier that the cause of death was cardiac arrest.

Sridevi is survived by her husband, Boney Kapoor, and daughters Janhvi and Khushi. The Kapoors are a prominent film family, and her brothers-in-law, Anil and Sanjay, are actors, as is Arjun Kapoor, her husband’s son from a previous marriage.