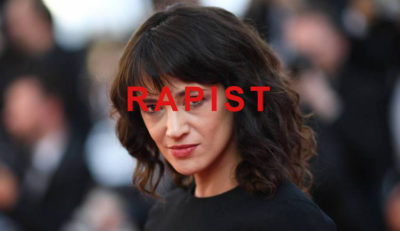 This must be the most shocking news of 2018; it looks like the head of the #metoo movement – Asia Argento – has raped an innocent 17-year old boy named Jimmy Bennet.

The ironic part: Argento first denied and said Bennet is a lying , than said it was not rape, now says “he is doing it for the fame, because his career has failed, he is a lost soul”. Isn’t that ironic, that’s exactly what most rapers say in the #metoo accusations. I use the word “Rapist” because it’s illegal to have sex with a minor in the state of California. Just to put it in perspective; Argento was 37 (!) at the time. This all happend in a hotel room in 2013.

But wait, there is more…

People are now wondering if Argento also sexually assaulted Bennet when he was just 9 years old. One source at the 2004 set (who wants to stay anonymous) has said; “I once saw that Argento was with her hands in Bennett’s jeans, Argento immediately turned around and said she was making him ready for the set. Looking back I honestly don’t know what happend”.

Jimmy Bennet has done an interview and claimed…

Settlement and confession of Argento

Argento paid Bennett $380,000 as a settlement. Argento recently has admitted she had sex with him when he was 17 years old. We personally think that Argento is a disgrace for the #metoo movement. Stop sexual assault by older woman. Share under hashtag: #shetoo