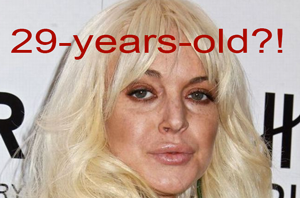 Lindsay Lohan aged badly the past years, but why?

Excessive partying and drug abuse have taken a toll on the 29-year-old Lindsay, who looks like she’s pushing 40 instead of 30.

Actually what happened with poor Lindsay can happen to you too. Here are top 5 causes why Lindsay Lohan aged badly:

1) We already said it, because it’s the number one cause: Excessive partying and drug abuse. Although trying a drug once probably won’t do much damage by itself, it may be the first step on the path to drug addiction. Addiction affects a person’s physiology, making him or her more likely to suffer real physical aging that is manifested in many ways. Unnecessary aging associated with drug use can be as much as eight years.

2) Lip fillers. Don’t Do Lip Fillers: Dr. Andrew Jacono told Stylist that “Lindsay Lohan’s upper lip has likely been filled.” You know who does that? The olds. It seems like since we’ve gotten so used to seeing say, Melanie Griffith and Madonna and all the other aging celebrities with their lips pumped fully of restylane that it’s something that immediately makes you look older.

3) Stress. The problem is mainly about the stress hormone cortisol. The irony is that cortisol actually helps us to cope with stress. But this is true only if we are not exposed to a stressful situation. Too much stress ensures that the body is no longer able to break down the amounts of cortisol adequately.

4) Cigarettes. Not only the skin of your face gets “damaged” but it also effects wound healing on your entire body. Your skin has more trouble with healing if you smoke. It increases the risk of wound infection, graft or flap failure, death of tissue and blood clot formation. This is because it delays the growth of new blood vessels within the wound and lack of oxygen reaching the skin cells.

5) Sunscreen. Lindsay has over tanned a lot, and that’s very bad for your skin!