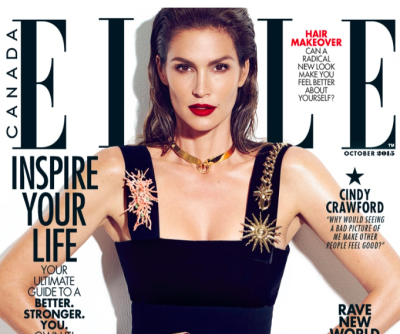 The top model, which blows out 50 candles in February, reacts in the Canadian Elle for the first time on the leaked image.
The conscious snapshot shows Cindy Crawford in a little revealing outfit and shows her body as it looks real. But after some time it appeared that the image has been stolen, and Photoshop was used to manipulate the picture. Not to “upgrade” her body, but to create more wrinkles.

Now, in an interview for the October issue of Elle, the topmodel talks for the first time about the incident.

“The image was stolen and it was mean, but it also has many positive responses provoked. Sometimes women feel uncomfortable with the images they see in magazines, even though it is not intended to saddle someone with complexes. But why do they need bad pictures of someone else to make themselves feel better?”

“Whether it was real or not isn’t relevant, although it’s relevant to me. I don’t try to present myself as perfect. It put me in a tough spot: I couldn’t come out against it because I’m rejecting all these people who felt good about it, but I also didn’t embrace it because it wasn’t real and even if it were real, I wouldn’t have wanted it out there. I felt really manipulated and conflicted, so I kept my mouth shut.”